An Outfit-A-Long (Or, Birds and Bows and Vianne)

July 30, 2015
Evening guys - this is a very exciting post, but will be short. It's Thursday night (technically Friday morning), I have work tomorrow, my alarm goes off in 5 hours. I should be going to bed, but I needed to get this post up now before the weekend.

So, last year Andi Satterlund of Untangling Knots and Lauren of Lladybird hosted the first ever Outfit Along, or OAL. I loved the idea, and also the dress (it's still in the queue - soon, soon...), and so I tried, but my knitting skills were not even nearly up to scratch! I failed before the first hurdle, as it were. But when they announced it was going to happen again this year, I was ALL. OVER. THAT. Because now I can actually knit things! 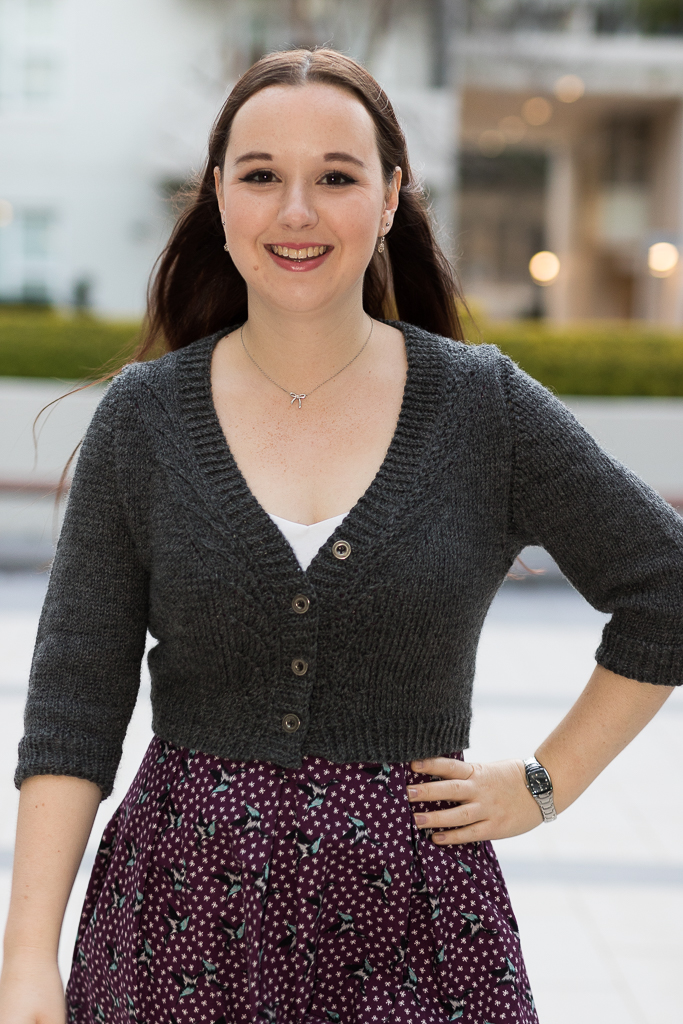 (So my hair is a bit crazy in all these shots - it was super windy! Also it bothers me that the bottom of the ribbing doesn't line up properly - I think that was my blocking. What a noob.)

I actually didn't follow the OAL exactly, but that's part of the beauty of it - you don't have to. I made a dress and cropped cardi, but as long as you sewed something and knit something within the time frame, it counted. I started my cardi about a week into the OAL, thinking I'd need all the time I could get, but actually got it finished a couple of weeks ago. The dress only took a couple of days now I've used the pattern a few times.

I chose Andi's pattern the Vianne for my cardigan, the official OAL pattern, but followed her guide to knit the back plain. I felt that plain meant more wearability. Also, you may notice mine looks different, it's more lines in the detail rather than lace... That's entirely my fault. At almost completing the cardigan, I was knitting it with my Mum, when she lent over and casually said, "You do know you're doing your yarnovers backwards, right?" FACEPALM. No. No I did not. But it looks okay, so I'm happy with it. The fit... I made a M, but shortened the sleeves slightly (just by trying as I went with the first and copying it for the second), and did half the ribbing on the body to match the number of rows on the sleeves. Next time, I'll go a size down on the sleeves - I like my cardigans a little tighter around the sleeve, but it's certainly nothing to frog about. 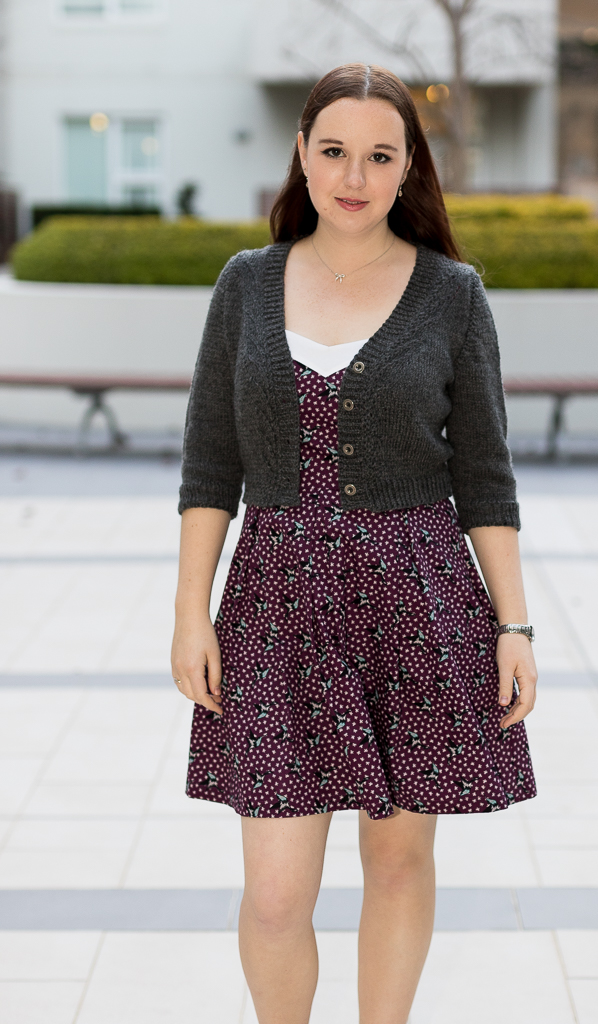 It's my first wholly completed cardigan (the first attempt I gave up on, the second is just needing a button band now that this one is finished), and I'm very happy with it. The pretty metal buttons I picked up for 15 cents each at the charity sewing store - so awesome! 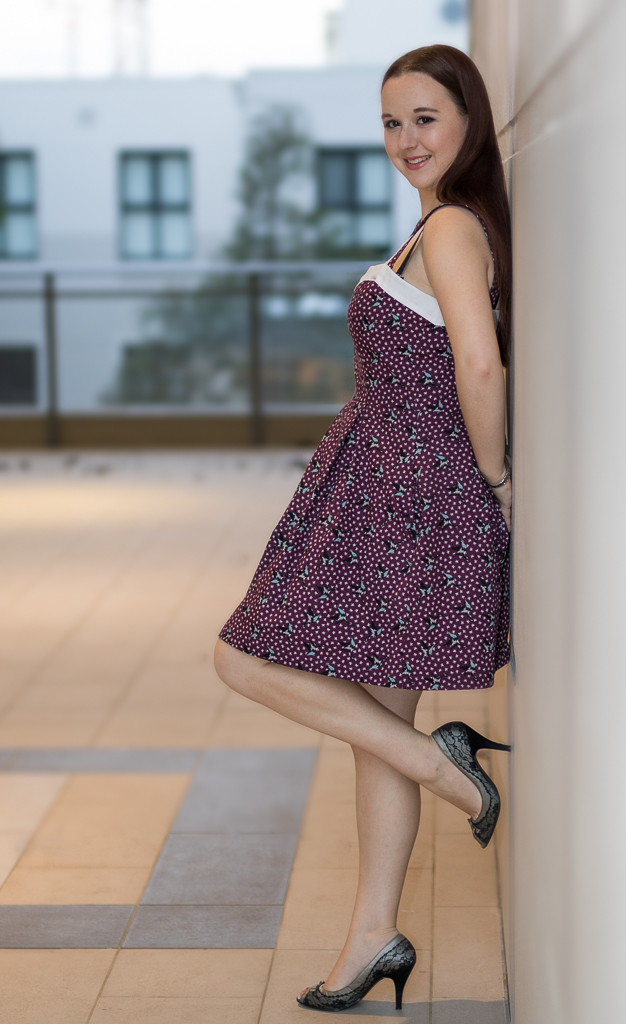 AND now, on to the dress. This is another New Look 6048, size 16 with the tweaks I added to the bust (see my Blue Flowers dress or TARDIS dress for proper details). The bust sits properly flat and fits right now, which is awesome. I used this darling birds and bows cotton I bought last year in Melbourne (originally was being saved for a Cambie, but I'm glad I went with this instead), and the contrast is just plain white cotton sateen, for the extra weight. I love the fit and shape of this dress so much, I will certainly come back to it again - I just need to make some other things first! 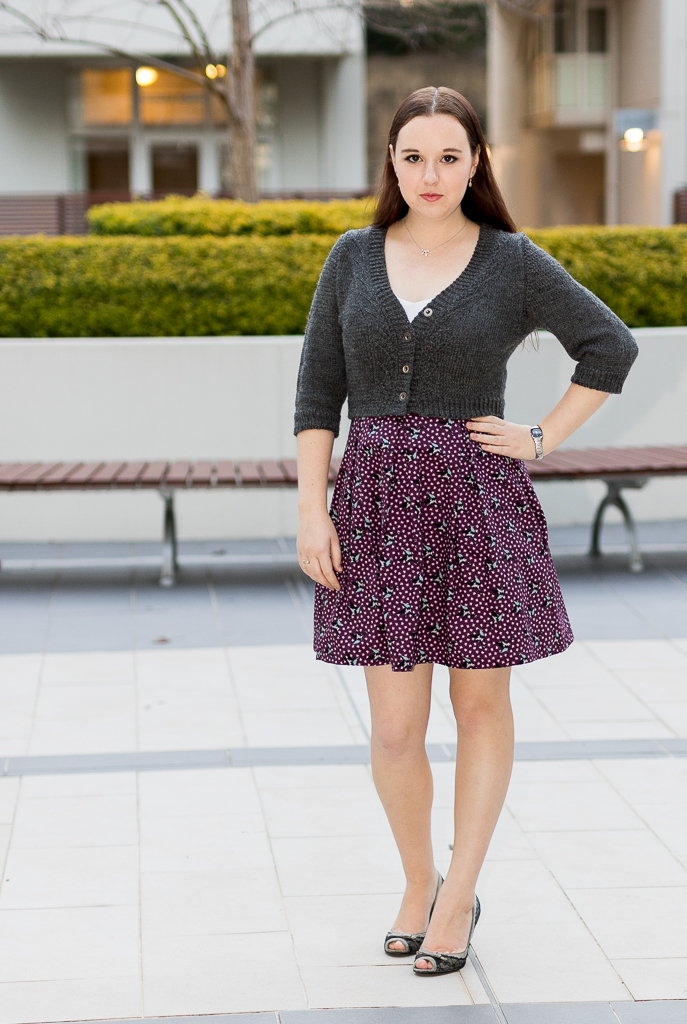 The fabric only has the tiniest amount of grey in it, but I thought the grey cardigan would be a neutral (of sorts) which I could wear a lot. I'm super super happy with this outfit, in short, and in long, it's awesome and I'm wearing it out to dinner this weekend!

Popular posts from this blog

What I Did Last Summer; or, my Kelly Anorak for Anorak August! 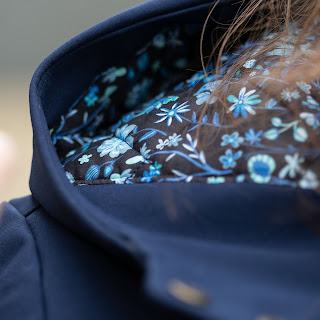 This is the first new blog post that I have done since... Well, for a while. I had a very productive few months during lockdown/working from home. This project is then how I spent pretty much the whole of my summer holidays (aside from one pair of Carolyn PJ shorts in double gauze, hopefully soon to have a matching top!) Since going back to work however, I have had so little time to do anything but work that I have sewed something crazy like 7 seams total. But anyway, that is how I have been feeling and that is what it is. I try not to dwell on it. I have to start by saying that this was a PROCESS. That being said, it is totally possible without being overwhelmed if you break it up and take your time! If you include all the planning time, I have had this project in the works since before October 2019, which was when I bought the fabric for the outer from Guthrie and Ghani during SewBrum 2019. Then I got the following: Outer fabric from Guthrie and Ghani (navy blue Softshell fabric, now
Read more 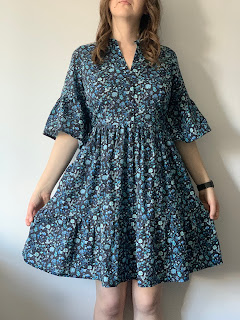 My Myosotis toile was the practice for this garment! If you have seen this blog before (hi again!), then you will recognise this fabric. When ordering the fabric for my Kelly Anorak, I fell in love with the Liberty print Botanist's Diary, which was the perfect match for my outer fabric. And when ordering it, I may have *accidentally* put 5m in my cart, which was a crazy expense and wayyy more fabric than I knew I'd need - but then it came in handy! I had it in my mind to also make a dress using this fabric with what was leftover. I will, however be avoiding wearing them together as that would actually be too much! As soon as I made my first Myosotis (in black and white check cotton), I knew I would be making more. I had plans in my head about 3 others, one of which is made (this one), one which is cut out (in petrol blue double gauze), and another which currently only exists in my head (in broderie anglaise). I briefly contemplated using the other colourway of Botanists Diary (
Read more 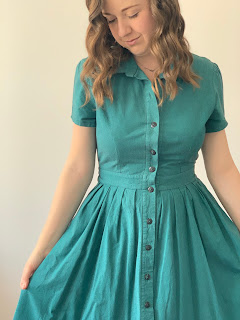 This shirt dress was all the rage back in the day, wasn't it? And I made 3 in the end! Both the other versions are blogged already - the first was a lovely sky blue linen which ended up purple as an (successful) attempt to hide some unfortunate fabric pen disaster... The second turned out perfectly in Liberty lawn with self covered buttons to wear to the BBQ the day after my wedding... And this, it actually has a small adventure in it too! I actually have no notes on this project (oops!) so I can't remember exactly what I did, although I probably made a sz14 and took it in a tiny bit at the waist as I did with my Liberty version. I also folded out some of the excess in the back, as there is a lot of fabric there! It's definitely View B (love that gathered skirt!). I used a really lovely woven cotton which is this nice teal colour. The story is here - these were not the original buttons. I found in my stash these gorgeous wooden buttons with painted designs on
Read more